A few months ago, I somehow convinced myself that buying the Belkin Wemo was a good idea. The thought of home automation has always felt like the holy grail of geekyness, and if I could figure out a reasonable way to do it, I’d be the happiest kid on the block.

The truth about these types of gadgets, though, is that we’re not quite there yet. It’s totally cool to have a wifi-enabled socket, but it’s not quite useful enough. It’s a straight power/no power switch that you can do geeky things with. But how many of our modern devices work by simply plugging them in? 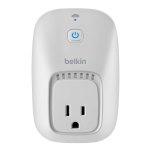 The unit itself is pretty cool. It’s a breeze to set up and totally works as advertised (for me, anyway) but I can’t help but think how far away we are from where I want to be with home automation. I want to be able to control ALL THE THINGS from one device, or automate how I interact with my house in a way that’s useful to me.

One thing that I will say about the Wemo is that whoever decided to integrate it with ifttt is a genius and should be given the biggest raise ever. As far as I’m concerned, it’s the coolest and only way to put it to use.

I haven’t come up with any useful ifttt recipes yet for it, but my favorite so far is that every Friday at 10am, my light turns on to remind me to go get a burrito for #BurritoFriday. Sadly, though, as awesome as that is, it still isn’t worth the price tag.

I’d love to hear about your home automation setup. Besides Nest for climate control and Wemo for power, are we any closer to Back to the Future II?

8 thoughts on “Where are we with home automation?”